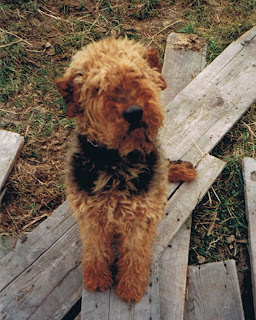 Our ancient Airedale, Boomer, is now fifteen or so — old for a dog, very old for a large breed, and truly remarkable for an altogether outdoor dog, who has refused the house (and until last winter, the garage) even in the deepest cold of winter. He's a tough old man, and he still moves about the yard in a loose trot like it's all his.

He's never been much of a watch-dog or a hunter. Gun-shy since puppyhood and easily distracted, he's simply never had the same sense of duty as Puck, our mini Schnauzer, who patrols the yard and house for any sign of trouble from strangers, squirrels, or even neighbors he suspects. He has never backed down from a fight, to my knowledge and loved to chase cats — but fight, chase, or kill, it was always with a look of joyful gameness, like he was testing his skills, happy to win or lose, bloody or be bloodied. He killed a stray cat once, and left it lay on the driveway; he didn't worry it with his teeth or parade around with it in his jaws. He used to nab gophers now and again, and would toss them into the air and catch them, or bat them around like hacky-sacks. He was strong and quick, but never mean.

Today you can walk up to him from the back, the side, or even the front, and if he's not looking at you, he won't know your there until you touch him, stomp, or clap. He's slower now, and more frail, but still affable, and I love him.

So last weekend — the Saturday after Thanksgiving — I woke in the wee hours, maybe 2:30, to Boomer's persistent barking. The last two winters he's had episodes like mini-strokes or seizures, in which he loses his coordination and sense of equilibrium and begins to stagger around and into obstacles. Last December he woke me this same way, albeit with a more pained and panicked bark. Still, this time I again rose fearing the worst.

I went to the deck door and opened in, letting the winter cold roll in. As soon as the door opened, his barking stopped. I couldn't see him in the blackness of the kennel — there was no snow on the ground. He whined softly, once toward me and the house; the next toward the narrow patch of woods behind the house and the street beyond. It was not a plaintive cry, but an urgent, pay-attention call.

On the street beyond the trees I heard muffled voices and the shuffle-stomp of drunken footsteps, moving toward the house on the lot whose southeast corner touches our northwest.

I heard the workings of the latch, more shuffling, and soft thump of a door sealing out the night. I heard the click of the bolt. And I heard Boomer turn back into his dog house, circle, and lie down with a tired galumph. The night was silent. He never made another sound until morning.

He knew they were there, and he knew when I knew. I had assumed for some time that his hearing and sight were failing, but perhaps it's his aging brain, so easily distracted as a young dog, is now drawn in tight focus by whatever grabs its attention. During the day I can sneak up on him because so many other things capture his eye or nose.

But at night, in the silence, it seems no one gets by.

Photo: Boomer in his younger days, probably 8 to 10 years ago.