The Second Third, Week 1: Pulling My Own Weight 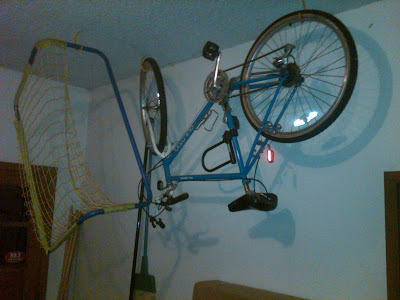 Somewhere around ninth or tenth grade, I took my required high-school health class. Early that first semester, we were asked to set a fitness goal for ourselves. I was one of the small guys on the football team, and a mediocre wrestler, at best, with a large head, skinny build, and little natural athletic talent — so there was plenty of room for physical improvement.

I thought about speed and strength-related goals, like many of my male classmates, but ultimately settled on this: “I want to be able to bike or walk anyplace I want to go, even when I’m in my 70s.”

Or something like that; you get the gist. To be completely honest, I had visions of a family bike trip across the country. Our teacher was also a coach on his way to assistant principal, but even he took notice. This goal was not like a lot of the others. It was extremely long-term, and seemed modest, but as a man of a certain age, he knew this was no small thing.

As a senior, I played varsity football as second-string noseguard. I was about 6-2 and 175 pounds at the end of season, so when wrestling started, I told my coach I was going 189. (Dad told me in 7th grade, when I said I wanted to wrestle, that I always had to wrestle up a weight class — I was forbidden to cut weight, or he would pull me from the team.)

Freshman year at Yale, after several months away from organized sports, I entered an intramural wrestling tournament. I wrestled three shortened periods, won my first match, and went outside to puke in the snow.

The second match was the next day. This time, my opponent had put at least modest effort into his cardio since high school, and it showed. For me, it’s been downhill since.

Today? 6-3 and 235 (on a good day). My bike hung in the garage all spring and summer this year. I road the stationary bike indoors after dark fairly regularly for a few months — but as far as biking anywhere I want to go…well, I can still ride, but we aren’t gonna make time. Especially on the hills.

What’s more: it has begun to bother me that I cannot move my own weight with just my arms. I can do solid pushups, but no pull-ups. From a survival standpoint, this seems like a bad thing. Not that I expect to be in a fight-or-flight situation this week, but then, that’s the point: you never know…

In some ways I was wise as a kid; in some ways, just way less busy and as invincible as only a teenage boy can be. But here in my Second Third, I should be self-sufficient — and that means physically, too. I’ve got work to do.