Who Is the Public? 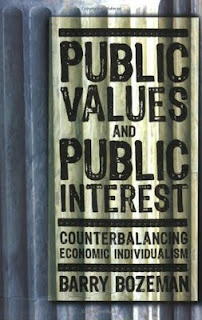 I have just finished another book I would not have read if not for my job, Barry Bozeman's Public Values and Public Interest: Counterbalancing Economic Individualism. First, permit me to confess that, left to my own devices, I would read fiction, poetry, and an occasional history -- so I am being forced to broaden my horizons and get educated, which is never a bad thing. Second, let me say that, as a wannabe writer, I have many, many thoughts about this book, mostly concerning its readability. I would not say that I enjoyed it, but it did provoke thought. The primary thought it provoked may be worth sharing. I say "may be" because I am not an economist, a philosopher, a political scientist, or a public interest or public management theorist, so it's possible that I simply didn't get it.

My primary thought about the book is that it spends a great deal of time on the topics of whether and how it is possible to identify public values and the public interest, and contrasting those with private or individual economic values and interests (which are often not the same), but it spends remarkably little time on the question of "Who is the Public?" The author is very conscious (almost too conscious) of the limits -- the squishiness -- of terms like "the public interest" and "public values," but while his book tackles "interest" and "values" at length, it gives short shrift to "public."

Especially in the U.S., a vast nation with remarkably diverse cultures, religions, lifestyles, and economies depending on where in the country you reside, it seems to me that the more immediate the "public," the more practical and realistic it is to identify shared public values and pursue the public interest. At the state level, this becomes less realistic: every state in which I've ever lived has had marked, or even deep, social, economic, political, and cultural divisions ("Outstate" or greater Minnesota versus the Twin Cities metro. East River versus West River. Downstate versus the U.P.) and different lifestyles worth protecting. At the national level, then, it seems unlikely that we could identify public values and a cohesive public interest, aside from the broad priorities of securing the nation and preserving our rights to life, liberty, and the pursuit of happiness. The difficulty of pursuing public values and the public interest is not identifying values and interests -- these are abundant, diverse, and obvious -- but identifying who shares them, which helps to decide at what level of society they should be implemented.

The critique of economic individualism (which, says Bozeman, is increasingly driving our public policy agenda) in the book insists that individuals in this model are concerned primarily with their own economic interests, and perhaps those of a few close others (immediate family and the like). That may be the proper definition of economic individualism, but I don't know anyone who lives this way. As a friend in Western South Dakota has explained, in his part of the prairie, neighbors take care of each other -- and if someone doesn't contribute to the good of the community, over time they are made unwelcome. They simply don't last. Those who remain recognize that it is in their personal interest to take public interest: to be engaged in the community and preserve their shared values and lifestyle.

I enjoy a similar experience in "The Bubble" -- the devout, small-town Catholic communities in Albertville and St. Michael. My circle of public interest begins at home, with my family; then expands to encompass my parish and the people with whom I share a fundamental belief system and way of life; then to my town(s), which provide the education my children receive and the goods and services we need to live and thrive; then to my state and nation, which should be responsible for ensuring my towns, parish, and family have the opportunity and freedom to thrive. I invest what time, talent, and treasure that I am still free to spend as I wish in the circles closest to me -- which makes sense, since the more distant circles I am already obligated by law to support.

It seems to me that Bozeman's approach to identifying public values, public interest, and ultimately, instances of failure of public policy to deliver in the public interest, is useful in inverse proportion to the size and distance of the "public" considered. At the local level, the public interest is much easier to identify -- because although our population is increasingly diverse, we tend to cluster together with likeminded folks who share similar values. But as long as the majority of public resources are allocated at the state and national level, we will struggle with coming up with one-size-fits-all solutions to generic political issues that approximate real-world challenges, but do not reflect the actual problems of real people living in genuine community with each other.