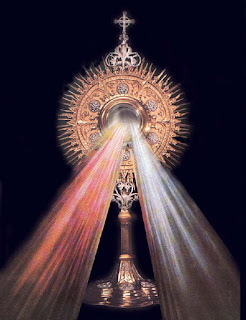 [Blogger's Note: This is roughly the "pep talk"I gave to First Communion parents at the Wednesday, March 16, class -- I am posting it here to share it with those who missed.]


The next day, the crowd that remained across the sea saw that there had been only one boat there, and that Jesus had not gone along with his disciples in the boat, but only his disciples had left. Other boats came from Tiberias near the place where they had eaten the bread when the Lord gave thanks. When the crowd saw that neither Jesus nor his disciples were there, they themselves got into boats and came to Capernaum looking for Jesus. And when they found him across the sea they said to him, “Rabbi, when did you get here?” Jesus answered them and said, “Amen, amen, I say to you, you are looking for me not because you saw signs but because you ate the loaves and were filled. Do not work for food that perishes but for the food that endures for eternal life, which the Son of Man will give you. For on him the Father, God, has set his seal.” So they said to him, “What can we do to accomplish the works of God?” Jesus answered and said to them, “This is the work of God, that you believe in the one he sent.” So they said to him, “What sign can you do, that we may see and believe in you? What can you do? Our ancestors ate manna in the desert, as it is written: ‘He gave them bread from heaven to eat.’” So Jesus said to them, “Amen, amen, I say to you, it was not Moses who gave the bread from heaven; my Father gives you the true bread from heaven. For the bread of God is that which comes down from heaven and gives life to the world.” So they said to him, “Sir, give us this bread always.” Jesus said to them, “I am the bread of life; whoever comes to me will never hunger, and whoever believes in me will never thirst. But I told you that although you have seen [me], you do not believe. Everything that the Father gives me will come to me, and I will not reject anyone who comes to me, because I came down from heaven not to do my own will but the will of the one who sent me. And this is the will of the one who sent me, that I should not lose anything of what he gave me, but that I should raise it [on] the last day. For this is the will of my Father, that everyone who sees the Son and believes in him may have eternal life, and I shall raise him [on] the last day.” -- John 6:22-40

One of the striking things about this passage is that this conversation happens right after Jesus feeds 5,000 people with five loaves of bread and two fish -- and already the people are asking Him for another sign, so that they can believe in Him: "What can you do?" Time and again, Jesus does incredible things, and time and again, the people doubt and ask for another sign.

This passage continues in with the famous Bread of Life discourse, in which Jesus tells the people, "I am the bread of life. Your ancestors ate the manna in the desert, but they died; this is the bread that comes down from heaven so that one may eat it and not die. I am the living bread that came down from heaven; whoever eats this bread will live forever; and the bread that I will give is my flesh for the life of the world" (John 6: 48-51)"

The people, and even his own disciples, struggle with this -- it doesn't makes sense and it offends many of them, so they begin to murmur about it. But Jesus doesn't back down. He doesn't say, "Oh, I met this as a metaphor." He strengthens His language and insists that the people need to eat his flesh and drink his blood. And for many people, this is too much -- they stop following Him.

Many Catholics struggle with the mystery of the Real Presence of Jesus in the Holy Eucharist, because it is a mystery. I have struggled with it, too, over the years, and so I pray with the man who asked Jesus to cure his son of a demon: "I do believe, help my unbelief!" (Mark 9:24).

As parents, we have to make a conscious effort of the will to believe this teaching and understand it as best we can. Why? Because as a Church, this is what we believe, and as a parish, this is what we are teaching your children: that Jesus is truly present, body, blood, soul, and divinity, in the Holy Eucharist. We make a big deal out of First Communion, and that's wonderful. but if we tell our children that Jesus is truly present in the Eucharist, and the next weekend we don't return to Mass, at some level they will know that we don't really believe it, because if we did, nothing would keep us away!

As I said, I've struggled with this great mystery of our faith, as well -- so I want to share a few things that helped me along the way.
I remember, several years ago, my predecessor Carol asked me if I would lead the closing prayer for our LIFT classes. We had a brief period of Adoration at the end, and I was contemplating what I should say before the closing prayer and wondering how I got in this position. I fell to thinking about who was the most important person in the room. Certainly not me, even though I was leading prayer. Carol was the director of faith formation, but Father was there, too -- so he was the most important, the leader...

Then I looked at the monstrance and realized the truth that was staring me in the face: the most important person in the room was Jesus Christ, truly present in the Eucharist.

As parents, we must make every effort to believe this and act on it. There is no better witness, no better way to pass on the Catholic faith, than you making the Mass and Holy Eucharist the top priority in your life.