We Are a Pilgrim People 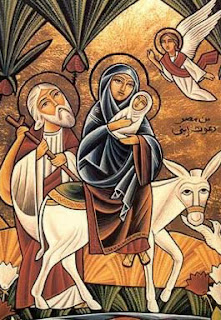 “I’ll be home for Christmas, if only in my dreams.”

We are on the home stretch: a week out from the blessed Feast of the Nativity, Christmas, when we celebrate the birth of our Savior, Jesus Christ. Many of us, however, feel as though Christmas has been upon us for weeks now, an immense burden of gifts, lights, music, and cheer under which we labor to breathe—like a lone elf struggling to load the loot of the world into a glossy red sleigh.

The first Christmas was uncomfortable for a different set of reasons. In the days prior, a newly-married couple traveled from Nazareth to Bethlehem with a few essentials and a donkey. They traveled not by choice, but by order of the emperor in Rome. They arrived not to familiar faces, food, and comfort, but to a town crowded with distant kin and strangers, and the crudest of accommodations: a dugout-stable-turned-makeshift-nursery where the woman would give birth to a son.


It turned into celebration of sorts, I suppose, as angels summoned shepherds from the hills to the town to greet the newborn as they were, dirt-poor and smelling of sheep. A star, too, beckoned Magi from the East, strange and majestic, in rich robes and bearing gifts too generous for the circumstances. (I wonder if Joseph might have gripped his staff a little tighter, wondering how he, his wife, and son would make it back across the dangerous country alive while carrying gold, frankincense, and myrrh.)

Imagine a Christmas celebration in which only your third and fourth cousins showed up, along with the local indigent population and three fabulously wealthy foreigners—and then you had a baby the basement. Perhaps the stresses of this Christmas are more manageable from this perspective.

Mary and Joseph were displaced—from Nazareth to Bethlehem for the census; from Bethlehem to Jerusalem for the presentation of Jesus at the Temple; and in exile to Egypt, to protect their son from the murderous intent of Herod. Even as a baby, “the Son of Man has nowhere to rest his head” (Matthew 8:20).

In LIFT this month, we are completing our study of the Mass. As an introduction to the adult and teen lesson, we are watching a short video from elementsofthecatholicmass.com on the role of parishioners in the Mass. As the video explains, the word parishioner comes from the Greek work paraoikos, meaning pilgrim—it’s the same Greek word that gives us the English word pariah, which means outcast.

We don’t belong here. We, like the Holy Family, are a pilgrim people, en route to our true home with God in heaven. The Church is the ship that carries us: the ark which preserves God’s people from the storms and waves that batter and drown the rest of the world.* Let us take refuge here from the maelstrom—the dizzying spin the world has put on Christmas—and draw near, instead, to Mary, Joseph, and the newborn king of kings.

* * * * *
*In fact, the area of the church worship space where we sit, which we commonly call the sanctuary, is technically called the nave—which comes from the Latin word for ship.