The Still, Small Voice of God 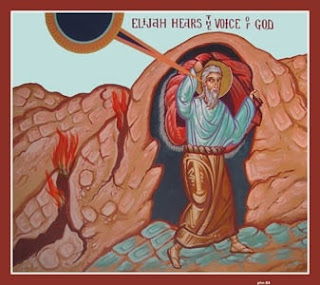 It is Tuesday afternoon, and I am writing from home. This column should have been done and in already. It is not, because even a job working for the church is not as important as some things.

Around 9 p.m. last night my youngest son threw up, and my bride informed me she didn’t feel well either.  Between 9 p.m. and 2 a.m. or so, my son was sick probably two dozen times. Jodi did not get as sick, but was as sleepless as Trevor—and I tried to stay clear so that hopefully I could handle little Lily in the morning and keep her from catching whatever this was.

I rose and prayed with Jodi at 5:30. She felt a bit better, and Trevor was sleeping, at last.  At around 6, Emma was sick the first time, and by 8, Lily was complaining that she didn’t feel well either. I was getting ready for work—Day 2 with our new faith formation coordinator, Andrea Zachman—but had the sinking feeling that it was only a matter of time before it hit me, and that my colleagues might rather I stayed home. I was torn—I felt fine, but so had Trevor and Emma before it hit, and I had plenty of work to do. Lily seemed fine, but if she were on the verge, I didn’t want her spreading it to her friends and their families. Jodi was torn, too—she didn’t feel great, but had a mountain of work waiting for her and didn’t feel she could afford to miss a day.

And as fate would have it, we had a blanket of fresh snow on the walk, cars, and roads.

Ultimately we compromised: we both went to work briefly to take care of a few things and bring some additional work home to do around our other duties. We were out of several basic food items in our house, so I fought the blowing snow to stock up on a few things—and now here I sit, writing furiously.

We are all called by God—do you hear Him? I often imagine the God of the prophets speaking to them in a deep, thundering voice, but that’s not what we hear in first Kings, above. Elijah recognizes the Lord in “a light, silent sound”—other translations say “a sound of sheer silence” or “a still, small voice.” God whispers, as it were, drawing us close with his words, into an intimate conversation with Him.

Unfortunately, the noise of the world too often drowns Him out. We hear the voices of our colleagues and bosses ringing in our ears; the ringing of the phone and ping of emails, IMs, and texts…the traffic report…the weather…and nothing of the still, small voice of God.

Excuse me a minute: my other high-schooler, Gabe, just called—he’s sick and can’t drive himself home. Jodi and I need to go get him and the Suburban.

We are all called to a first and universal vocation of holiness. Most of us are called to live out that first vocation in terms of a second vocation to marriage and family life—we sanctify ourselves, our spouses, and our children by imaging God Who is Love. Everything else we do and are come in below that. We are created from Love, and Love is our purpose and end. That’s all. That’s enough.