Blogger's Note: The soundtrack to this post is above. You can about imagine a bare-knuckles brawl a la The Quiet Man, can't you?

It's St. Patrick's Day, which in the U.S. means wearing o' the green and drinkin' o' the beer. (Unfortunately, too many folks are drinking green beer tonight, instead of the real deal: thick, black, and pleasantly bitter.)

I'll confess that I'm wearing green today. Am I Irish? Depends on how you count. I'm half Polish (my mother's side: Galubenskis and Koczwaras), and the rest is a mix. According to my late grandfather, Duane Thorp, we Thorps are English, French, Dutch, maybe a little bit American Indian, and Scotch-Irish or Scots-Irish, which, according to at least one account I've read, means I'm descended from some really ornery Scotsmen whom the English settled in Ireland to drive out the Irish Catholics in the 1800s. Even in the 1950s, when my father was a boy in the Thumb of Michigan, he recalls an older relative — a bare-knuckles brawler of some repute — having a few drinks and going looking for Catholics to fight.*

So am I even a wee bit Irish? Well, tonight I won't be drinking green beer, or black stout, or golden Irish whiskey, because it's Lent, and I've given them up until Easter. Instead I'll be celebrating with the beautiful Lorica of St.Patrick. These Thorps are Catholic now — and more Irish than ever! 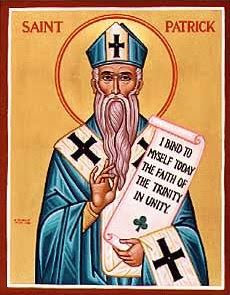 *Of course, the Poles in the area — including the Galubenski family who lived next door to Dad, and their daughter, whom he married — were Catholic.