Book Break: The Abolition of Man 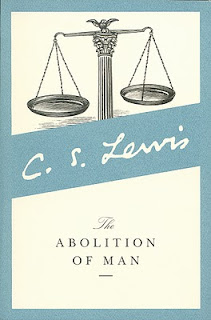 I have said more than once that too often we seek to explain the hell out of everything and explain the heaven out of it in the process. This observation seems tightly intertwined with the arguments set forth in C.S. Lewis's thin little book, The Abolition of Man. Do not judge this book by its size -- the content is dense and provocative, demanding close attention. I'm sure I'll need to read it again (and again).

The book starts innocently enough, with a critique of an English textbook of the day (the late 1930s) -- then expands into a defense of objective reality and value, and the increasingly maligned notion of true right and true wrong. Lewis doesn't suggest that we won't continue to debate the finer points of how to live according to this universal Way (he uses The Tao as his term in the book, though he makes it clear that this is for convenience; that the Way transcends world views, creeds, and cultures); his goal is not peacemaking, but to lend credence to the idea that some things are simply worth fighting for and to illustrate the dangers of "debunking" objective values in favor of a more scientific approach to the world -- an approach which, ultimately, (he said way back in 1939) would force us to sacrifice our humanity.

This relates to an idea I began to form last week, thinking about the story of the Fall in the book of Genesis: When we seek to become like gods, we become something less. Why? Because the only thing of value we have to trade for godhood is the thing that already makes us as close to God as we can ever be -- our humanity. Lewis's book, to me, was sobering and prescient.

Unfortunately, my head is still spinning, and I know I'm not doing the book justice by a mile. Perhaps a few favorite passages, then…

"As the king governs by his executive, so Reason in man must rule the mere appetites by means of the 'spirited element'. The head rules the belly through the chest … It may even be said that it is by this middle element that man is man: for by his intellect he is mere spirit and by his appetite mere animal. … The operation of The Green Book and its kind is to produce what may be called Men without Chests. It is an outrage that they should be commonly spoken of as Intellectuals. This gives them the chance to say that he who attacks them attacks Intelligence. It is not so. They are not distinguished from other men by any unusual skill in finding truth nor any virginal ardour to pursue her. … It is not excess of thought but defect of fertile and generous emotion that marks them out. Their heads are no bigger than the ordinary: it is the atrophy of the chest beneath that makes them seem so."

"The final stage is come when Man by eugenics, by pre-natal conditioning, and by an education and propaganda based on a perfect applied psychology, has obtained full control over himself. Human nature will be the last part of Nature to surrender to Man. … Man's conquest of Nature turns out, in the moment of its consummation, to be Nature's conquest of Man. Every victory we seemed to win has led us, step by step, to this conclusion. All Nature's apparent reverses have been but tactical withdrawals. We thought we were beating her back when she was luring us on. What looked to us like hands held up in surrender was really the opening of arms to enfold us for ever. If the fully planned and conditioned world (with its Tao a mere product of the planning) comes into existence, Nature will be troubled no more by the restive species that rose in revolt against her so many millions of years ago, will be vexed no longer by its chatter of truth and mercy and beauty and happiness. Ferum victorem cepit: and if the eugenics are efficient enough there will be no second revolt, but all snug beneath the Conditioners, and the Conditioners beneath her, till the moon falls or the sun grows cold."*

"[Y]ou cannot go on 'explaining away' for ever: you will find that you have explained explanation itself away. You cannot go on 'seeing through' things for ever. The whole point of seeing through something is to see something through it. It is good that the window should be transparent, because the street or garden beyond it is opaque. How if you saw through the garden too? It is no use trying to 'see through' first principles. If you see through everything, then everything is transparent. But a wholly transparent world is an invisible world. To 'see through' all things is the same as not to see."

I wholeheartedly recommend this book, although it is essentially philosophy and so will vex some readers. I read the Chronicles of Narnia as a boy, enjoying them somewhat less than the Lord of the Rings trilogy, which appealed to my love of history and myth and language in a different way entirely. But I renewed my love of Lewis as my own children began to read (and watch) Narnia, and even moreso when I finally acquainted myself with Mere Christianity. Abolition came on the recommendation of a good friend and deep thinker, and it is again clear to me that I must read more by C.S. Lewis.