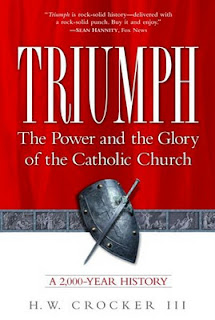 The title of this book tells you exactly what to expect. Triumph: The Power and the Glory of the Catholic Church by H.W. Crocker III was recommended to me by two or three different friends within a single month, which I found hard to ignore. It presents a well-referenced but "popular" history of the Catholic Church, written with a confident pro-Catholic bias, presumably for a Catholic audience. It was an enjoyable jaunt through the Church's history, and it will give fire to the lukewarm. It will not, I predict, win the hearts and minds of many non-Catholic readers, should they choose to pick it up, because most will not finish it.

As I said, I enjoyed the book, but found it to be very uneven in quality. Of course, any history of an institution as old and rich as the Church cannot be confined to 427 pages without leaving out a few details. For the first half of the book, Crocker bounds through the centuries, focusing his attention on the most colorful or heroic defenders of the faith, painting a fascinating portrait of the Catholic Church ascending, but also justifying the shortcomings of its leaders in a way that borders on "the end justifies the means" at times, and dismissing sin within the Church as no worse than what was happening elsewhere, a standard I'm not sure Christ would have supported. This is not to say that the book is inaccurate -- and historical context is important -- but the ease with which war and wickedness are noted and discounted is disconcerting when we are called to be perfect, as Christ is perfect. If not perfect, we should at least be penitent...
Crocker's unfiltered bias, wit, and sarcasm reach a fever pitch with Martin Luther and the Reformation. References to "the Hitler in Luther" and "Luther's Khmer Rouge" suggest the author's motivation is stirring Catholic pride and outrage rather than advancing scholarship in Church history. The criticism of Luther, Calvin, and other Protestant "fathers" is sometimes humorous, occasionally disturbing, and rarely if ever even-handed. I hope we would not tolerate a similar treatment of our priests.
The second half of the book seemed more balanced, although I'm curious if the support expressed for strong monarchies and an educated upper class over more democratic ideals is a true reflection of the 18th and 19th century Church or the author's own preferences. I guess I have more reading to do in the regard. But the stance of the Church against the tide of liberalism, relativism, materialism, and all the other -isms encompassed in modernism did cause a warm swelling in my breast. There is wisdom in the Catholic Church, and an intellectual tradition that embraces the arts, the sciences, and the classics and needs not fear the world...if only more of us were better versed in it. I have made that a goal of my own, and Triumph provided further inspiration to pursue it.

This book is every bit as pro-Catholic as so many other accounts of world history are anti-. Personally, I would've liked to have seen more of the Church's intellectual tradition itself in the book, and less of characters, wars, and political intrigue. I'd love to hear your thoughts on it, but if you read it, know what you're getting into -- especially if you are Protestant!